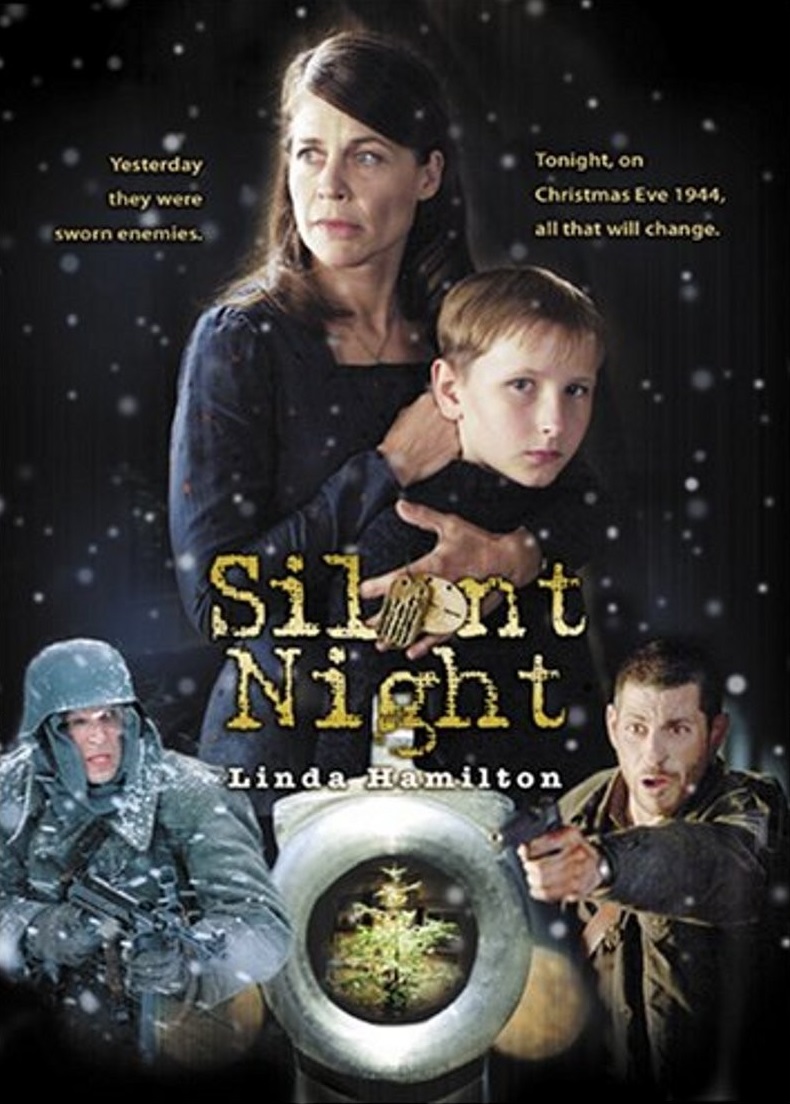 This movie is based on a true story about Christmas Eve 1944 and the Battle of the Bulge temporary “truce.” There’s actually some German speaking in this movie, so heads up, you’ll be reading some captions towards the beginning. I didn’t know Linda Hamilton had it in her! I don’t speak German, so I have no idea whether or not her accent was correct – but it passes the smell test for a German-descended but thoroughly (for better or for worse) American woman such as myself.

Fritz’s mama, despite being German and having the most Aryan-looking child on the planet, explains to her son that he must learn English, which is plot ruse enough that both actors can switch to English in a German accent – and later converse with the American soldiers who barge in with an injured comrade. She is also not a huge fan of the führer, and in the isolation of their family hunting lodge, she tells her son her true thoughts on the Nazis. Because this movie was made for an American audience, naturally, she is the one sympathetic German on the whole planet. She has to be, otherwise we wouldn’t watch this movie! She claims she’s not siding with anyone, but just letting those Americans in her house and not trying to murder them is considered treason.

The American soldiers are understandably suspicious of Elizabeth and Fritz. Elizabeth hides their guns, feeling that if they are going to stay, then she would at least like to harbor them without the specter of their guns hanging over her family. Fair enough, right?

Pvt. Jimmy Rossi: You’re right about one thing: if I could get these hands around the fuhrer’s neck, I’d wring ’em like a chicken. Feel good about it, too. And don’t believe everything you hear on the radio. Some of the things you hear just ain’t so.

So this isn’t really a Christmas movie as much as a war movie. And the acting is better than most, I have to say. I don’t know if it’s because it’s a true story, but they didn’t totally fuck up the plot either. The production value is decent when you consider the movie was made in 2002.

Elizabeth: May I suggest that on this holiest of nights, we try to discover that which we have in common.

It’s a heart-warming one and worth watching if you’re feeling nostalgic for the early aughts and/or you super-enjoy WWII stories. I fucking abhor violence and I don’t want to glorify war – this movie makes the soldiers human, makes them see the humanity in one another, and makes clear the pointlessness of capitalistic, nationalist attitudes. It got a whole extra half a star for refusing to get down and dirty with making Nazis all good or all bad. These are just humans.