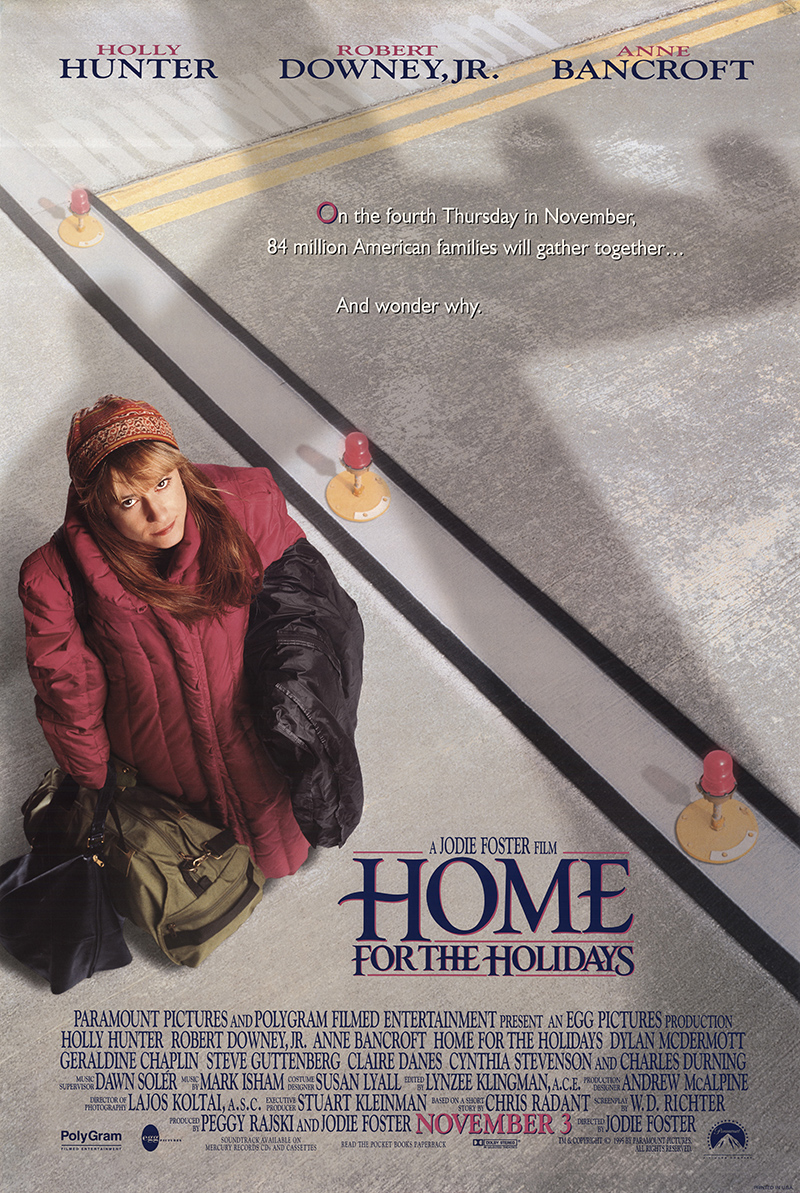 Oh, there’s baby Claire Danes! Goddess bless her, I’m so happy to see Angela Chase. That doesn’t make up for Robert Downey, Jr*, he’s a dodo bird, but I’m willing to wait and see. (His character is huge asshole, shocking.) Claire plays Holly Hunter‘s daughter — and the film opens with Holly’s character, Claudia, getting fired and Kitt tells her mom that she is going to have sex with her boyfriend as she drops mom off at the airport. 1995 is pre-9/11, of course, so air travel is nothing like it is these days. This flight looks phenomenal to me — the lady next to Claudia is eating food she brought from home.

Anyway, this movie was directed by Jodie Foster. And this is really a Thanksgiving movie, but I’ve made this allowance for the blog before.

Adele: Wait ’til you see your dad’s organ! He can’t keep his hands off it!

[Spoiler: they are talking about a musical instrument.]

The truly legendary pair of Anne Bancroft and Charles Durning play Claudia’s parents. This movie is star-spangled. Dylan McDermott is the love interest who, at first, doesn’t seem like he bats for Claudia’s team. David Strathairn is one of my favorites, especially in A League of Their Own, but he’s one of those actors who has been in so many things that you couldn’t name. He’s great, here. And we cannot forget Cynthia Stevenson, who is a fucking treasure in Dead Like Me. (Side note: if you haven’t watched Dead Like Me, you’re fucking up, it’s streaming on multiple sites right now.) Holly Hunter has always been a favorite. Her voice, her lips, there’s something so wonderful about the way she delivers even the most pedestrian dialogue. She is herself in this movie, so that’s a plus.

GODDESS this movie is long.

This movie encapsulates all of the chaos and dysfunction of family get-togethers, plus a little extra because this is a movie after all. But I was too young to see this movie the first time – 12 to be exact – but I wonder how this movie did at the box office. I am not going to go google it. Google it yourself. Oh, this movie is well-written, irreverent, ridiculous, and far better than I expected it to be when I put it on. The depths of family dysfunction are something worth plumbing, when plumbed beautifully and artfully — maybe even messily. Multiple people video-ing and photographing at the Thanksgiving table. Arguing about Capitalism at the Thanksgiving table. It feels like something… will happen. Or break. I smell… a hospital trip… a death… a tipping of the scales.

Joanne: YOU COCKSUCKER!
Joanne: I am the only normal person here!

It turns out Joanne is a homophobe, so she deserves whatever she gets. Fuck Joanne until her redemption arc — if it ever comes. (It never comes.) The chemistry that Downey, Jr. and Hunter have in this movie is the stuff of sibling dreams. If you wished you had a gay brother, this might satiate some of that for you.

*Robert Downey Jr. publicly admitted to using heroin during the making of this film. Jodie Foster wrote him a letter praising his work, but warning him that he could not keep doing this on other films. (Via IMDB.)